In the wake of the recent Shanghai Husi meat scandal, McDonald’s Japan began importing all of its chicken from Thailand rather than China, and executives also came up with a creative way to reassure customers they weren’t eating rotten chicken: introducing tofu nuggets to the menu.

A spokesman for McDonald’s (who we’re a little suspicious of due to their claim tofu nuggets had been planned before the scandal) announced that they would be the first nugget product to feature tofu as the main ingredient, as well as the equally underwhelming boast that, “Calorie-wise, it’s a bit lower than chicken as well.”

Despite our reluctance, as a self-nominated guinea pig for the English-speaking community of Japan we felt it was our responsibility to make our way to the nearest McDonald’s and give them a try.

The complete name you can see on the box is toufu shinjo nagetto, “Tofu Fish Patty Nuggets,” and the complimentary packet on the left is ginger sauce. For ￥249 you get a box of four. 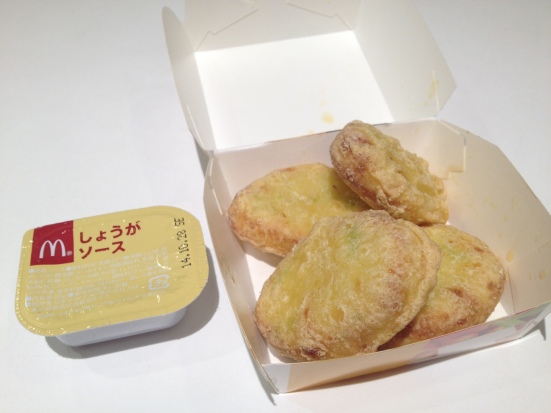 The exterior is as crispy and satisfying as the standard chicken nuggets, but the difference in the filling is immediately apparent in its softer texture which, for better or worse, kind of makes it feel like you’re just eating hollow batter.

The filling isn’t just tofu, there’s also tiny chunks of onion, edamame (Japanese soybean), carrots and fish which, in all honesty, give the filling the only morsel of flavouring it provides.

Perhaps more disappointingly, the sauce was equally tasteless, teasing with just a hint of ginger and tasting more like an incredibly mild sweet chili sauce.

Using the Shanghai Husi rating scale, we give the tofu nuggets a score of two partially-rotted chickens out of five. Bland food lovers should make their way to McDonald’s before late-September, when they’re expected to be taken off the menu.

Tell us what you think Cancel reply